We’re proud to have team members who live and work in northern B.C., both Indigenous and non-Indigenous.

Sarah Dickie, Indigenous Engagement Lead for Coastal GasLink, is one of our employees. She's also a proud Fort Nelson First Nation member, living and working in northern B.C. Every member of our team has committed to creating an extraordinary legacy. This means living our values and empowering people to speak up.

Today, we're sharing Sarah's perspective. At a time when it’s not easy for members of the community to speak out, Sarah wrote and shared the following post from her personal Facebook early this morning. Sarah supports our sharing her perspective. 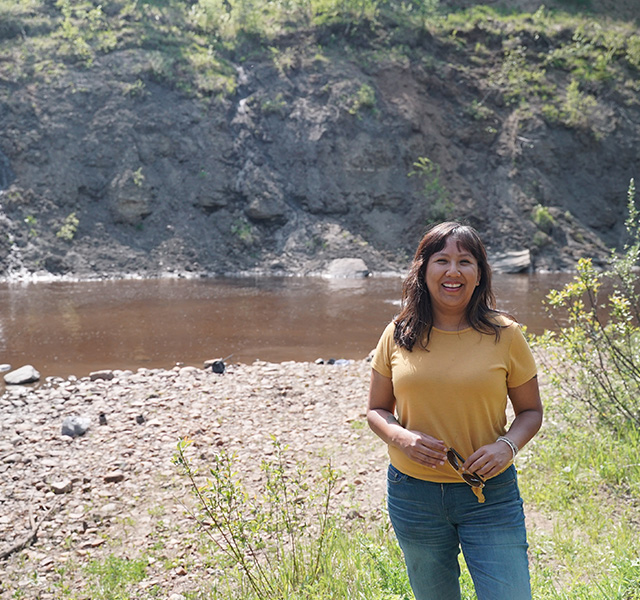 “Conversations happen in the middle. You have to hear someone else when you're engaged in conversation.”

"What an all-time low: racism, lateral violence, hatred, fear, bigotry, fear of speaking up... it's not easy but I'm speaking out. I'm sitting here, writing on a hunk of metal and plastic on a platform supported by thousands of servers (thanks, Internet). Not to be flippant, but unless someone has transcribed this on birch bark and translated this into a different language - - - samsies, nice to connect with you.

Maybe not so nice to connect ... when the internet is delivering all these horrible messages. I work for Industry and therefore am no longer Indigenous anymore. Industry is evil. Economic participation is... bad? Economic participation is colonizing our own people. In a bit of continuity, there's racism everywhere and the North still does not have a voice heard in the South (Victoria muncipal government has comment on Indigenous Nationhood that is shared everywhere, while ft st John's municipal stance on it being beyond their scope, mandate or authority is ignored). Not so nice, is seeing other Indigenous people diminish and deny my own personal identity and that of my community.

Yes we've had oil and gas activity up here since the 1950's. Yes, we know what a pipeline is. Yes, we know the distinction and impacts between BC gas and Alberta oil.... because it's not BC gas, it's the natural gas, condensate, butane, propane etc from our own backyards, the Montney play. Treaty 8 Nations have been working with the companies working to explore, extract, produce, move and sell these products. Yes, we have labourers, medics and equipment operators. Yes, we have equity stake, partnerships, joint ventures, Nation- and indigenous-owned companies in those same fields. Direct employment in industry and out of it. Power engineers that can operate gas plants, or power a hospital, a mill (if any are running), or a massive shopping centre (in some big city). People that can build leases and industrial lots.... and also remdiate old sites and build residential development. People that can feed, house, and keep other people alive in other places. Valuable people. People of worth to themselves, their families, their communities and both BC and Canada's tax base..... Everyone.

Look a little further North. Fort Nelson. I was born there. The Horn River basin and the Cordova embayment are there. There's no logging, no mills. Oil and gas activity is at an all time low. But Fort Nelson First Nation is an equity partner in local LNG production and sale to neighbours in NT and YK (switching from loud, noisy, environmentally and monetarily expensive diesel generators). No one is celebrating this, though, because LNG is a dirty word. What about converting the old Clarke lakes area into geothermal energy? We felt impacts of the WAC Bennet dam flooding but aren't even tied into that electric grid. We could be moving to self reliance and even selling power. Not to brag, but I am very proud of my Nation. I'm proud of the partnerships, expertise and money in the North. I live and work out of ft st john, what if the economy supported me living where I was born again? Not to be circular, but this computer and access to the Interent isn't as accessible or cheap in other places. I live here, though, in the North. I've been a medic, I helped consult on oil and gas activities, and I'm helping to build this pipeline.

We have Treaty 8 Nations leading caribou habitat restoration, penning programs to protect and grow populations, studies to support and continuously make better our world (yes, far in advance of government and Industry). We have Nations OWNING wind farms. I'm all over it, and if we had the same Nations owning and operating the large-scale, specialized equipment to recycle these turbines at end of life, even better. But we are also doing this here. That 48" pipeline won't be full of nothing. It will be full of natural gas from our backyards. That is several thousand wells. That is significant. Our say at the extraction end of it is not more important than those at the end-point and LNG production side of it. But it does matter. What about the years of partnerships with the Producers here? They are valuable. But they take work. Leadership and community members participate.

I have absolutely no desire to defend or validate my indigeneity to anyone. I know who and where I come from, my connection to my family, language, culture, land, and history. I have no desire to judge you and how you identify yourself in the world but expect the same basic courtesy in return. I did my time in the South to get an education. I have a lot of connections that support the Wet’suwet’en hereditary leadership. I have a lot of connections that support the elected leadership (who sometimes also hold a hereditary title). Many understand that there are individual WFN members that support this Project (whether in support of them or to disenfranchise them and kick them out of the community). There are a few voices calling for unity among the Nation to sort out governance internally. It's great to see powerhouse Nations like the Tshilqot’in and Tahltan, who have taken the Indigenous rights fight and economic determination to new heights, support the Wet’suwet’en Nation. It's not really the place for one Nation to tell another Nation if they are legitimate or not, nor how they should govern themselves.

And I hope people see that it is not okay to strip or try to deny another of their identity. Maybe you haven't pulled out the blood quantum rule book, but if you're identifying the finite things that allow you ignore my voice, because I'm stating things across this polarized divide that you don't want to hear...? That's on you. Conversations happen in the middle. You have to hear someone else when you're engaged in conversation. Saying that my entire life is devoid of tradition and culture, that I am not worthy enough to belong to FNFN, Treaty 8 or claim my indigenous heritage at all because we disagree about a pipeline says more about you than me."